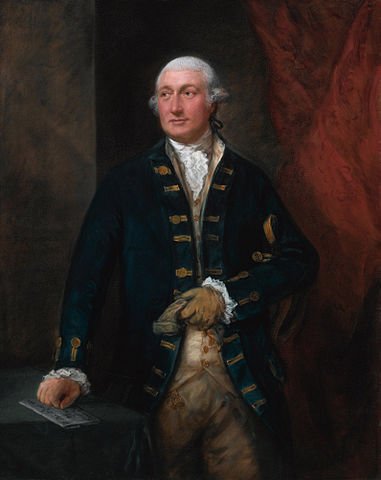 Barely any of the vessels were seaworthy enough to make the voyage, whilst the naval ships were short-handed and the French prizes furnished with skeleton crews, but as there were no dockyards in the West Indies that had the resources to repair them, and there were not the personnel to man them, sailing for England was the only option. That it had been decided to undertake the voyage during the hurricane season appeared hazardous in the extreme, and from the very first days the small fleet suffered from adverse weather, causing the officers of the Ardent to obtain a prompt return of that particular ship to Port Royal.

On 22 August, a month into the voyage, the Hector became detached in the latitude of Bermuda. Her reduced crew of two hundred and twenty-three men had been further depleted by sickness and could barely keep the leaky vessel afloat, let alone man the fifty-two cannon she had been left with after the other twenty-two had been removed at Jamaica. Thus when the troop-carrying French eighteen-pounder frigate Aigle 40, Captain Louis-René-Madeleine-Levassor Latouche-Tréville, and twelve-pounder frigate Gloire 32, Captain Louis Marie Casimir, Chevalier de Vallongue, ran into her some three hundred miles south of Nova Scotia on the evening of 4 September, the Hector’s chances of escape appeared remote.

When the Hector was first discovered the Gloire was appreciably closer to her than the Aigle; indeed, it was possible that Captain de Vallongue was even surprised by the proximity of the ex-French ship. The two vessels hailed each other at half-pistol shot range, and once their identities had been established the Gloire attempted to use her superior mobility to assume a raking position. After exchanging broadsides, the captains spoke each other again and then renewed the engagement, at which point the heavier Aigle came up to move inside her consort and take up the fight. Latouche-Tréville soon realised from the rate of his opponent’s fire that she was short-handed, so when the Hector hauled to the wind with the apparent intention of boarding his frigate, he welcomed the attempt in the knowledge that the troops he had aboard would tip the duel in his favour. In the event, although the Hector’s spritsail yard snagged the Aigle’s fore-shrouds and the gunners were able to reach out and beat each other with their rammers, the larger vessel sheered off. Thereafter the action continued at musket range with the Hector’s fire reducing significantly as she lost manoeuvrability. Once the Gloire took up a raking position the prize ship’s fate appeared sealed, but after prosecuting their attack for some three hours the French suddenly broke off the engagement when other sails appeared on the horizon at about 5 a.m., these probably belonging to the rest of Graves’ convoy.

In giving a magnificent account of herself the sickly, battered undermanned Hector had lost nine men killed and thirty-three wounded, in comparison to French casualties of five men killed and eleven wounded. Captain Bourchier had been severely injured during the engagement and was succeeded in command by his young first lieutenant, Henry Inman.

The men of war amongst Graves’ convoy were further reduced on 8 September when the Pallas was detached in escort of the leaking Caton to make the best of their way north to Halifax. Having undergone repairs, the Caton did eventually make it to England in the autumn of 1783 where she was refitted, although she was only ever commissioned as a hospital ship. The Pallas didn’t even complete her passage home, for after departing Halifax in escort of a convoy she sprung a leak in the Atlantic and was run ashore on São Jorge Isle in the Azores on 12 February 1783, to be destroyed by fire two weeks later. 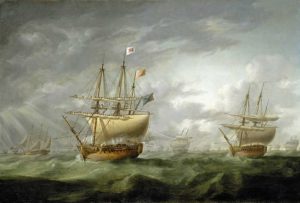 Meanwhile on 16 September the remainder of Graves’ convoy which now consisted of ninety ships was way out in the middle of the Atlantic, some eight hundred miles south-east of Newfoundland, when foul weather was observed further to the south-east. As Graves attempted to gather the ships about him the heavy gale bore down to strike in the late evening, forcing those vessels that were already fighting leaks to send even more men to the pumps. By 2 a.m. on the 17th the wind had slackened, and the danger appeared to be over, but then a huge thunderstorm rolled in from the south-east bringing with it heavy rain squalls.

At 3 a.m. Graves’ flagship found herself on the wrong tack when she was caught by a violent shift in the wind from east south-east to the north north-west. The admiral had requested that he be called in the event of the storm worsening, but unforgivably the captain, Sylverius Moriarty, had issued orders not to bother the senior officer. Caught aback amidst the hurricane-force wind and the thunder and lightning, the Ramillies’ mainmast rolled overboard, her mizzen parted halfway up, and her fore-topmast and fore-yard were destroyed. The same wind disabled her rudder, and she was left a mere hulk making sternway on the towering seas with the water pouring into the wardroom and captain’s cabin. Even whilst Graves exhorted his men to clear away the wreckage her seams were opening up, and as dawn broke, they beheld the further discouraging sight of the storeship Dutton sinking headfirst into the overpowering waves.

The Centaur had hauled up her mainsail and was scudding along with no other canvas aloft when a violent gust thrust her onto her beam ends. Briefly she remained overset until Captain Inglefied ordered the cutting away of her main and mizzen masts, and although she immediately lost her rudder as well as her foremast and bowsprit, she at least righted. Those guns that had broken loose were re-housed and she wallowed heavily in the waves as the wind slowly abated, feeling confident enough to reject the offer of assistance from several merchantmen because the apparently undamaged Ville de Paris had wore ship and was standing towards her. But then unaccountably her huge consort drifted past and with her went any hopes of salvation. Throughout the rest of the day the men baled the Centaur out as best they could by using canvas buckets, but with all the drinking water and supplies tarnished their exertions gradually waned, and when the gales increased that evening the Centaur’s fate was sealed. Once the water burst into her hold and she slowly began to sink there was an unseemly although understandable scramble to escape in her boats. Somewhat surprisingly Inglefield found a place in her pinnace for himself, and with eleven other men he survived to reach the Azores sixteen days later. Most of his erstwhile crew were left behind to drown, including a notable passenger, the recently posted Captain George Augustus Keppel.

The Hector had been left in an even worse condition following her action with the two French frigates, and when the hurricane struck, she came out of it with no masts and no rudder. For the next two weeks the sickly men toiled relentlessly at the pumps, occasionally kept there only by the coercion of Lieutenant Inman’s brace of pistols. With her provisions saturated by the gaining water in her hold, and the remaining crew of two hundred men depleted by further deaths caused by the sheer exhaustion of working the pumps, her salvation also appeared to be improbable. Providentially however, the tiny Dartmouth-based privateer Hawke, Captain John Hill, appeared in sight just as the ship was coming apart, and leaving the abandoned Hector to sink her crew were conveyed in the most trying cramped and exposed conditions to Newfoundland. 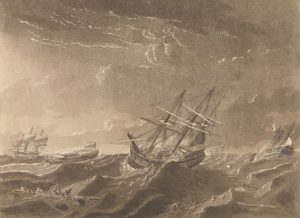 The aftermath of the storm, as depicted from one of the convoy

The Glorieux, which had already lost her foremast, bowsprit and main-topmast, sank on the 19th, whilst the fate of the Ville de Paris, which was under the command of the experienced yet only recently posted Captain George Wilkinson, was never ascertained, although she clearly foundered as a result of the hurricane. Eight hundred souls were lost from this one ship alone, including another recently posted captain, Lawrence Graeme, who had been sailing as a passenger. One man found clinging to a piece of wreckage was picked up by a Danish vessel, and although he claimed to have survived the foundering of the Ville de Paris and could remember seeing the Glorieux go down, his inordinate suffering had depredated his memory and he was unable to provide an accurate account of his own ship’s loss.

Meanwhile aboard Graves’ flagship Ramillies all hands had been turned to the pumps or had been hand-baling the rapidly opening ship. Scraps of sail were set on her foremast and mizzenmast stumps, and despite the huge winds she was able to keep pace with the merchant vessels for a time. Yet the water continued to force its way in, her pumps gradually became unusable, and by the 20th all of her cannon had been eased over the side. Exhibiting marvellous leadership, Graves refused all entreaties from his officers to move into one of the merchantmen, and gathering the crew together he declared that whilst she remained afloat the Ramillies’ appearance alone would be sufficient to frighten any enemy commerce raiders away from the convoy, and that an easing of the weather would allow them the necessary breathing space to refit the ship. Five days after the initial storm however her ballast and shot broke loose, destroying what remained of her pumps and the well, and leaving fifteen feet of water in her hold. After seeing every one of his men safely distributed amongst the convoy Graves watched from the merchantman Belle as his flagship was set on fire and blown up at 4 a.m. on 21 September. His sadness at her loss was all the greater as the Ramillies took his library and over one thousand guineas in property to the bottom of the sea with her.

The Canada alone survived the hurricane with much damage aloft, and with her main-topmast and mizzenmast down, and she soon became detached from the remainder of the convoy. Captain Hon. William Cornwallis was later accused by Graves’ followers of wilfully leaving him behind, which under the circumstances was sheer nonsense, but his ship’s survival did speak volumes for her commander’s professionalism and seamanship.

Admiral Graves eventually reached Cork on 10 October where he shifted his flag into the Myrmidon 22, Captain Thomas Drury, and took her to Plymouth, arriving a week later. More than three thousand souls had been left behind in the Atlantic, which was an indescribable loss of men that no battle at sea could ever replicate.