There were few officers in the navy more attentive to their duty than Captain Alan Gardner of the nine-pounder frigate Maidstone 28. The world was a black and white place to the gruff pugnacious man from the Midlands, and there was a huge gulf in his mind between right and wrong.

Having been despatched on a cruise off the River Delaware by Vice-Admiral Lord Howe, his command was some two hundred and twenty miles east south-east of Cape Henry when at 1 a.m. on 3 November an unknown ship was discovered in the north-west. The stranger would prove to be the heavily armed French merchantman Lyon 40, Captain Jean Michel.

With the wind being westerly and the stranger standing towards the east Captain Gardner immediately gave chase, and by 3.30 he was able to bring the Frenchman to action. An hour’s fierce engagement in high seas ensued before he had to haul off to furl the badly holed main-sail and repair damage to the Maidstone’s rigging caused by the enemy’s langridge shot. 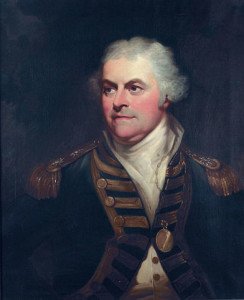 During the following hours the Maidstone remained in contact with the Frenchman, but then to the crew’s consternation the dawn light revealed a second vessel bearing down upon the frigate from to windward. Their dismay did not last long however, for in typical fashion Gardner announced that if she were the Frenchman’s consort he would bring her to action too. In the event this did not prove necessary, for when the second vessel made a private signal at 9 a.m. she found it unanswered by the Maidstone and took flight to the south within the hour. Such contemptible behaviour was beyond the ken of Gardner who was now able to concentrate all his attention on completing the capture of the Lyon, which vessel had put before the wind and was sailing under his topsails and foresails some two miles to leeward.

At midday the Maidstone brought the Lyon to close action for a second time, but still she had to batter her for a further hour before finally receiving her surrender. Captain Gardner suffered a severe wound to the hand in the struggle, being one of nine men wounded, one fatally, in addition to the four men killed aboard his command. French losses amounted to eight men killed and eighteen wounded.

The Maidstone’s first lieutenant, James Vashon, was sent aboard the defeated vessel to take possession, and he found her to be well-armed with twenty-eight 12-pounders, and six-6-pounders, whilst also carrying a superior crew of two hundred and sixteen men, some two dozen more than the Maidstone. The excellent prize was also laden with thirteen hundred hogsheads of tobacco which she had been transporting from Virginia to Lorient, and such a cargo would generate a sizeable sum in prizemoney for Gardner and his crew in England. Indeed, with both ships badly damaged aloft, the prize shipping three feet of water in her well and the Maidstone four feet in her hold, and with the prize crew of twenty-four being unable to transfer the French prisoners to the Maidstone, the prevailing wind for England represented Gardner’s best hope of getting both his charges to a safe haven.

However, although many officers would have used favourable circumstances to fill their pockets at no risk to their career, Gardner was made of far more honourable stuff. His station was on the western seaboard of the Atlantic and there he would remain, despite the fact that the sale of the Lyon’s cargo in America or the West Indies would be worth a fraction of that it would accrue in England.

After three fruitless weeks spent trying to reach New York the two ships made the best of their way south to Antigua, and with the French prisoners working at the pumps they finally reached the West Indian island on 21 December, some seven weeks after the original action. Upon arrival Gardner sent his dispatch into the commander-in-chief, Rear-Admiral Hon. Samuel Barrington, and the cargo was duly sold at a far less substantial price than would have been collected in England. Nevertheless, Captain Gardner was rightly credited for his highly meritorious and honourable devotion to his duty.