The Experiment 50 should not have been in British waters at all. Her proper station was in North America, but during December 1778 a tremendous offshore gale had blown her all the way back across the Atlantic. This submission to the forces of nature had represented no reflection at all upon the seamanship of her captain, Sir James Wallace, for earlier in the year he had gained universal admiration for his brilliant navigation of the treacherous Hell Gate off New York whilst escaping from the Comte d’Estaing’s Toulon fleet.

Having thus inadvertently returned to Europe, the Experiment was quickly attached to Vice-Admiral Marriot Arbuthnot’s New York-bound fleet of four sail of the line, a frigate and a fireship which departed St. Helens on 1 May with a three hundred sail convoy. Early in the morning of 2 May however, a privateer intercepted the convoy with news of a French expedition against Jersey, and realising that he needed to act without delay Arbuthnot ordered the convoy to make for Torbay under escort of the frigate whilst he sailed for the relief of the Channel Islands with the rest of his squadron. 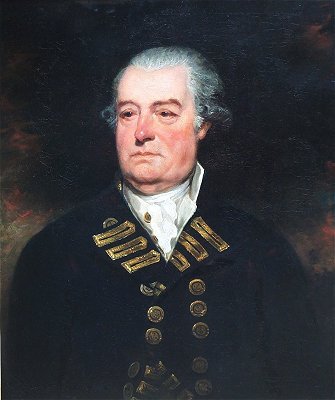 Upon reaching Jersey on 4 May, Arbuthnot was advised that the French attempt to land three days earlier in St. Ouen’s Bay with fifteen hundred troops in fishing boats protected by five men-of-war led by the Danaé 26 and Diane 26, had been thwarted. Prompt action by the Jersey militia and the 78th Highlanders had seen artillery placed on the beach, and with the French men-of-war unable to get inshore the invaders had withdrawn with some twenty men taken prisoner and a dozen or more drowned. Expecting to be rejoined by the Experiment which he had detached to Guernsey, Arbuthnot decided that there was nothing for him to do but leave the island and return to his convoy at Torbay.

In the meantime, word of the possible French invasion had reached Admiral Sir Thomas Pye at Portsmouth, and he had despatched a squadron of frigates under Captain John Lewis Gidoin of the Richmond to deal with the situation. Upon arriving at Boulé Bay, Jersey, Pye’s frigates found the Experiment, and in line with his seniority Gidoin took her under his orders. For several days nothing of note occurred, but when the Experiment put to sea on 10 May with the intention of rejoining Arbuthnot, she found herself driven back to her anchorage by an adverse westerly wind. Ultimately this abandoned departure would prove to be most providential.

Next day three small frigates, a cutter, and several small craft were spotted almost twenty miles from Jersey near the Chausey Islands off Normandy, and that night these vessels anchored off the town of Coutances. A conference between the British captains resolved to intercept the strangers, and it was decided to divide their strength the better to ensure success. Captain Wallace was appointed to command the second division of this force which in addition to the Experiment consisted of the Pallas 36, Unicorn 20, Fortune 14, and Cabot 14, and which soon set off around the south-western tip off Jersey.

Meanwhile Captain Gidoin took the first division of the British force south-eastwards around Guernsey towards the last known French anchorage at Coutances, and noting his approach the French weighed anchor and set sail for St. Malo. Gidoin maintained a chase until 10 p.m. when he was obliged to come to anchor between Granville and the Chausey Islands because of a contrary tide. Although he was able to get underway with the tide at 3 a.m. on the morning of 13 May he again had to come to anchor later that morning due to the lack of a favourable wind.

Captain Wallace had also been forced to anchor on the afternoon of the 11th, but at 7 pm on 12 May he was able to get under way and after clearing Jersey he maintained a course for France during the night. With the morning light came the discovery of a frigate sailing out of St. Malo, whilst the French squadron of three frigates, a cutter, and several small craft that had fled Gidoin were found to leeward, heading for Cancale Bay near St. Malo. Upon Wallace giving chase the frigate returned to St. Malo so instead he concentrated on the ships to leeward which now ran under the batteries in Cancale Bay to seek protection.

That did not stop Wallace. Realising that if the batteries fired upon him they would probably hit the French as well, he threw his ship at the enemy and soon forced the surrender of one of the small frigates, the Danaé 26, her crew fleeing ashore. Meanwhile the Pallas and Unicorn engaged the remainder of the French squadron despite the efforts of some local militia who were pounding away with howitzers and cannon from the beach. Having secured the Danaé by boarding, Wallace decided to seek out a new opponent and he settled on the battery itself in order to aid the rest of his squadron in their endeavours.

Overcoming the expostulations of the pilot who was doubtful of the shoaling waters, Wallace proceeded up the bay. Sure enough, the Experiment soon grounded, but it was within good range of the battery and a ferocious cannonade ensued that saw the action turn in favour of the British and resulted in the silencing of the French cannon. Inevitably the Frenchmen deserted their ships to seek safety ashore, resulting in three further vessels being seized. Of these the Valeur 26 was set ablaze by Captain Edmund Dod of the Cabot, the Récluse 24 was burned by the Experiments’ first lieutenant Peter Rothe, and the Dieppe 16 was scuttled, although she was later salvaged by the French.

The Experiment was subsequently refloated, but she had been badly damaged aloft in her three-quarter hour engagement with the battery and had suffered two men killed and thirteen wounded. In addition, the Cabot had incurred casualties of three men wounded. In time the Danae was conveyed to England by Lieutenant Rothe and she was bought by the navy and taken into commission. For their part in the action Commanders Charles Powell Hamilton of the Fortune and Edward Dod of the Cabot were posted captain.

The job done and the Channel Islands saved from further molestation by this particular squadron, Captain Wallace returned to Admiral Arbuthnot’s convoy and ultimately reached North America. Here on 24 September his good fortune finally deserted him, for after being dismasted in a gale off Georgia the Experiment was captured the Fendant 74, Zélé 74 and Sagittaire 50 from the Comte d’Estaing’s French fleet.