Captain Philemon Pownall was regarded by his contemporaries as one of the finest officers in the navy. Aged in his mid-forties, his background as the son of a shipbuilder had given him an excellent technical knowledge, and this advantage supplemented his natural characteristics of bravery, application and sense of duty. He had been fortunate too, having earned such an immense fortune for his part in the capture of the Spanish galleon Hermione in 1762 that he had been able to purchase an estate in Devon and employ the famed Capability Brown to landscape it.

Upon assuming command of the frigate Apollo 32 at the start of the American Revolutionary War, Pownall had further enhanced his glowing reputation with the capture of the French frigate Oiseau 32 in 1779, and later by prosecuting an hour-long engagement with the Spanish ship of the line Monarca 70 at the Moonlight Battle in January 1780, which had allowed her capture by Admiral Sir George Rodney s flagship, the Sandwich 90. 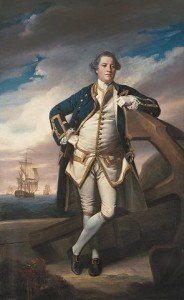 On the morning of 15 June 1780 the Apollo was cruising some dozen or so miles off Ostend in the company of the Cleopatra 32, Captain Hon. George Murray, when an unknown cutter was spotted in the south-west. With the wind in the north-east and the Cleopatra somewhat in advance, the two frigates gave chase, and when a warning cannon was fired the cutter eventually hove too. To the prize-hungry Britons disappointment she proved to be an English cutter, but their hopes were soon renewed when at about 10.30 a.m. another ship was seen standing away from the land in the south-west. This vessel was on the starboard tack, and sailing on a northerly course that would cross the Apollo s bows. She would prove to be the French privateer Stanislaus, mounting twenty-six 12-pounder cannon, although she was pierced for thirty-two cannon.

Captain Pownall immediately decided to intercept the Stanislaus, but the privateer had other thoughts, and she turned away towards the land at about 11 a.m., being intent on making her escape into neutral Ostend. With the wind bringing the Apollo down at a greater speed than the Frenchman would have wished, and with the Cleopatra being some distance off, the Apollo soon went about before tacking once more, so that she was on the Stanislaus weather quarter. The privateer replicated this manoeuvre, and as they passed each other the two vessels opened up with a broadside apiece, whereupon the Apollo tacked once more so that both vessels had their heads towards Ostend. Soon a close-range engagement was taking place, and for the next hour the two vessels pounded away at one another, with the privateer giving as good as she received, before Captain Pownall was suddenly struck down to the deck, dying almost instantly.

The command of the Apollo now passed to her more than capable first lieutenant and Pownall s chief pupil and acolyte, 23 year-old Edward Pellew. By now the Stanislaus was beginning to suffer at the guns of the British frigate, and either surmising that she had every intention of running herself ashore, or perhaps being unable to haul in his own sails because of the damage done to the Apollo s rigging, Pellew attempted to ply to and fro across the privateer s bows, unleashing a raking fire each time he did so.

Whilst the battle continued to rage the two ships were nearing the coast, and soon the engagement was being fought in shoaling water. Once the depth was found to be a mere twenty feet Pellew had little option but to cease fire, wear ship, and stand out to sea. Shortly afterwards the Stanislaus struck ground, her foremast and main-topmast going by the board, and as a signal that she now considered herself to be in neutral Dutch waters she fired a gun to leeward, one which the local garrison acknowledged.

After a brief conference Lieutenant Pellew and his fellow officers decided that it would not be possible to renew the action without contravening the laws of neutrality, and so with six men dead including her captain, and with another twenty men wounded, the Apollo stood off to repair the significant damage to her rigging, and to pump the three feet of water from her hold.

Eventually, by the circuitous route of the Stanislaus being re-floated, taken into Ostend, and then sold to the British government, the privateer would be commissioned into the navy. As the newly-named Proselyte 32 she saw five years of service in British colours, and by a huge slice of irony her first captain would be none other than John Brown, the son of Capability Brown who had designed Pownall s estate in Devon. Meanwhile the command of the Apollo passed to Captain John Bazely, who had recently returned from the Leeward Islands with the Pegasus 28.

Pownall s legacy to his country was the brilliant Edward Pellew, who would deservedly be promoted commander on 1 July, and would rise to become, arguably, the most complete officer in the service, being as adept a sailor as any man under his command, a brilliant frigate captain, and a successful fleet commander. He would also earn wealth and honours galore, and he would his career as Viscount Exmouth, a title that would be passed on to his eldest son whom he had named Pownall in honour of his tutor.

Had he survived, it is likely that Philemon Pownall too would have enjoyed the same glory and titles to add to the immense wealth he had earned in the capture of the Hermione, and to his reputation as an outstanding officer. His loss would be long lamented by his friends and, in particular, Pellew.