In 1783 a 29 year-old budding balloonist by the name of Count Francesco Zambeccari arrived in England having recently witnessed the first unmanned balloon flights in Paris by the Montgolfier brothers. That November the count sent his own unmanned balloon up from a house in Cheapside, and over the next year he worked with other keen balloonists, including Vincent Lunardi who was to undertake the first manned flight in England on 15 September 1784.

Zambeccari s ambition was to make his own balloon ride, but in order to finance the event he needed sponsorship and backing. This soon came in the shape of a donation of three hundred guineas from 61 year-old Rear-Admiral Sir Edward Vernon, an officer who had retired ashore in 1780 after four years service as commander-in-chief in the East Indies. Yet it soon transpired that the admiral wished to have his own enjoyment out of the investment, for a condition of his offering the three hundred guineas was that he would be one of the passengers in Count Zambeccari s balloon when it made its ascent. Plans were soon pit in place and it was decided that the flight would commence from Tottenham Court Road in London on Wednesday 23 March 1785. 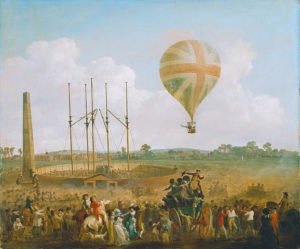 The excitement of a balloon ascent in 1785.

For several days beforehand the event was the talk of the town, and come midday on 23 March a huge crowd had gathered in Tottenham Court Road opposite Whitefield s Chapel, with the high and mighty mixing with the mob and, apparently, no small number of pickpockets, to enjoy the spectacle. By now the red and white balloon had been filling with air for the best part of an hour, but due to various difficulties it was not until 3.30 that the balloon, supposed to measure thirty-four feet in diameter, was even five-eighths full. A further delay was occasioned when part of the netting encompassing the balloon burst, and with a foul, cold wind setting in it seemed likely that the ascent would have to be postponed for the day. The mob began to grow increasingly restless and some threatened to tear the balloon to pieces if the intrepid count did not get on with it , but nothing daunted Zambeccari ordered repairs and soon the eleven by four foot boat or gondola, was brought to the balloon and made fast.

Many onlookers had by now left the scene, for notwithstanding the delays with the machine some seasonally late snow and hail had blown in, and in particular the ladies were suffering frozen feet through the inadequate protection of the straw that had been scattered on the ground. Whilst the more fortunate warmed themselves in the nearby Baker s House, the count did his best to quieten the mob by persuading them that he would ascend as soon as the storm had passed over. At last the netting was repaired, the balloon was filled to three-quarters capacity and Admiral Vernon, Count Zambeccari and a local young lady from Holborn by the name of Miss Grice, a worker from a Tambour company in Fleet Street, stepped into the gondola.

To a great roar of approval and an acclamation from the mob that Sam Buckerry was a damned honest fellow who kept his word , the fastenings were cast off at 3.30, and the balloon began to ascend…..until it reached a height of twenty feet when it began to descend. Frantically the occupants of the gondola jettisoned several bags of ballast but it was no good, the balloon would not rise. Clearly there was only one thing for it Miss Grice would have to be jettisoned too! The tearful, reluctant fledgling balloonist failed to persuade the admiral to give up his place, but at least she was acclaimed for her bravery by the admiring spectators, and it was from within the crowd that she watched her erstwhile companions suddenly shoot up into the now clear blue sky at 3.45 and began drifting off in a south-westerly direction. Soon the balloon was totally out of sight.

Shortly into the flight it became apparent that the string needed to pull the valve, and thus control the height of the machine, had been left within the balloon itself due to the failings of a rudimentary repair. As a consequence the balloon rose up to a great height above the gathering clouds and for a while the count and Admiral Vernon found themselves pleasantly warmed by the rays of the sun. Then three cords holding the boat under the balloon snapped at once, and it became clear that they would have to return to the ground as soon as possible. With the valve out of action the count had to commence the release of the inflammable air by cutting three silk tubes that had formed the initial rudimentary repair, whilst the remaining bag of ballast was also jettisoned. The initial response of the balloon was to ascend even higher, but the count reasoned correctly that the greater altitude would accelerate the release of the air and allow the balloon to eventually descend.

With a later estimation suggesting that the balloon actually soared to a height of ten thousand feet, it was not surprising that the two occupants reported difficulty in breathing, not to mention suffering from the bitter cold which particularly affected the aged admiral. But sure enough, having reached its zenith, the balloon began to descend, perhaps a little too rapidly and agitatedly for the occupants of the gondola, and it was soon passing down through a heavy snow cloud that did little to help the count and the admiral regain their bodily warmth.

So it was that at last, having been in flight for an the hour, and having traversed southwards across the county of Surrey for a total of thirty-seven miles, the balloon landed in King s-Field, some three miles from Horsham in northern Sussex, at about 4.45 p.m. The balloon and the gondola were safely secured, and the two balloonists returned to London at 11 o clock that evening to celebrate and review their flight. The balloon itself was later being put on display at the Lyceum in the Strand, with viewing charged at a shilling.

Nothing daunted from his experience, Admiral Vernon made another flight from Tottenham Court Road in the company of two gentlemen on Friday 3 June, this time landing in a wheat field nine miles from New Malden in Essex. He thereafter retired to his residence at Binfield, Berkshire, where he died seven years later. Count Zambeccari was to make many more balloon rides across Europe before he was killed in a ballooning accident in 1812.