On 15 March, Commodore Sir John Borlase Warren’s crack Channel-raiding frigate squadron, on this occasion consisting of his pennant ship the 24-pounder Pomone 44, the 24-pounder Anson 38, Captain Charles Philip Durham, and the 18-pounder Galatea 32, Captain Richard Goodwin Keats, together with the lugger Valiant, sailed out of Falmouth and stood over for the Brittany coast to rendezvous with the 18-pounder Artois 38, Captain Sir Edmund Nagle. The junction was made two days later, and the ships began patrolling to the south of Brest.

Come dawn on 20 March, being some three or four miles to the south-west of the Isle of Saintes, and with the wind at east by south, a cluster of sails were discovered from the masthead to windward in the south-east. Warren ordered a general chase, and it soon became apparent that the strangers constituted an enemy convoy numbering some sixty vessels which was steering in a southerly direction inshore under the protection of several men of war. Against the speed and power of the four heavy British frigates, those merchant vessels to the leeward of the convoy had little chance of survival, and by 10.30 a.m. four had struck to the Pomone and Artois, with the Valiant being ordered to escort these prizes to the nearest British port. 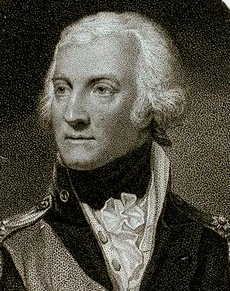 Warren now determined to bring the four light frigates, a corvette, and an armed storeship comprising the enemy men-of-war to action. The French force was made up of the 18-pounder frigate Proserpine 44, Commodore François-Henri-Eugéne Daugier, and the 12-pounder frigates Unitè 36, Captain Charles-Alexandre Durand-Linois, Coquille 36, Captain Pierre-Paul Gourrege, and Tamise 32, Captain Jean-Baptiste-Alexis Fradin, together with the corvette Cigogne 20, Lieutenant Louis-Gabriel Pillet, the storeship Etoile 24, Lieutenant Mathurin-Théodore Berthelin, and the gun-brig Mouche.

Even discounting the carronades sported by the Pomone and Anson, which would only have been effective at close quarters, the British squadron enjoyed a weight of broadside that was roughly a half as big again as their opponents, and so it was of little surprise that in forming a line ahead to windward, some three miles distant of the British but to leeward of the convoy, the French men-of-war displayed no inclination to seek an engagement.

Forming his own line on the starboard tack at 12.45, Warren set off in chase of the French squadron. Such was the latter’s determination to preserve the distance between themselves and the British frigates, that they simply replicated every tack which Warren’s squadron made, nevertheless, the commodore was able to bring his frigates up to within a half gunshot to leeward of his opponent’s rear at about 3 p.m. The French van ships, bar the Cigogne which maintained her course, bore down in support of their rear, the two forces approached each other on opposite tacks, and an action commenced. During the ensuing engagement, Warren’s rearmost frigate, the lighter Galatea, suffered the most, being damaged aloft, having a cannon dismounted, and incurring several casualties.

As soon as the Galatea had passed beyond the enemy line at about 3.50, Warren gave the order to tack in the hope of gaining the wind, and this the squadron was able to achieve by making a short board on the starboard tack. The French meanwhile closed in with their commodore and began to reform their line further inshore, from where a battery fired a couple of shots at the British squadron which fell short. At 4.45 Warren ordered his frigates, led by the Galatea, to break the enemy line and cut off their rearmost vessels, but the enemy retreated with all sail set in the direction of the rock-strewn Passage du Raz. The Galatea was able to cut off the last ship in the line, the storeship Etoile 24 after a brief exchange of shots; however, with night coming on, and the passage fraught with difficulties, Warren called off the chase. Meanwhile, the Mouche had taken the convoy into the safety of the Penmarks where they were protected by the batteries ashore.

The Etoile, which had been launched in 1783 with a nominal armament of twenty French 8-pounders on her upper deck and four French 4-pounders on her quarterdeck, was taken into Falmouth by the squadron before being escorted around to Plymouth on 4 April by the Artois. Upon inspection, she was found to be carrying a large number of old iron guns which it was believed she had been taking to Brest to be recast at the foundry there. It does not appear that she was bought into the British service.

The Galatea lost a midshipman and a seaman killed, and an acting-lieutenant and five seamen wounded in the affair, and she also sustained damage aloft. Otherwise, the squadron escaped unscathed. The four prizes taken by the squadron, which had all been bound from Brest for ports along the French Atlantic coast, were carried into Falmouth on the evening of 22 March by the Valiant, and here she landed fifty prisoners. The lugger also delivered the first news that an action was underway, prompting an expectation that at least some of the men-of-war and a greater part of the convoy would be captured.

It must therefore have been of great disappointment when Commodore Warren arrived back at Falmouth on 24 March with his sole prize, the ageing storeship Etoile. Here he wrote his dispatch to the Admiralty, and this proved to be a document that was to cause some criticism amongst historians, for in it he stated that the Coquille and Unité were 18-pounder frigates instead of 12-pounders, that the Etoile and Cigogne carried six and two additional guns respectively, and that the complements of each French man-of-war was far in excess of the reality. Historians would also come to question why the enemy had escaped so easily, especially when Warren had the brilliant Captain Keats at his disposal, not to mention two steady and capable officers in Durham and Nagle. Credit should nevertheless be given to Commodore Daugier for utilising the advantage he held with the weather-gauge to ensure the safety of his principal men-of-war.