Admiral Sir George Rodney, who had recently been joined by the resourceful Rear-Admiral Sir Samuel Hood with eight sail of the line, opened the 1781 Leeward Islands campaign by capturing the Dutch islands of St. Eustatius and St. Martin on 3 February. The spoils included stores to the value of three million pounds, together with one hundred and fifty richly laden merchant ships. Given his avaricious nature and mountainous debts there was much disquiet at home regarding Rodney s motives in attacking the Dutch islands, and the naturally griping Hood added to the uneasiness by moaning that his senior appeared to be more concerned with calculating his wealth rather than taking the war to the enemy. In the event Rodney did not profit from the campaign, as on 2 May a forewarned French squadron captured the richly laden convoy which was sailing for England with the booty from St. Eustatius. 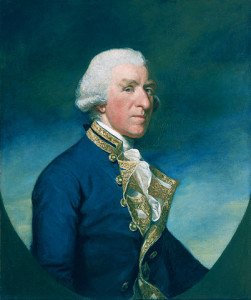 In the meantime Admiral Francois Joseph Paul de Grasse-Tilli, the newly appointed French commander-in-chief in the West Indies, had departed Brest with twenty-six sail of the line, and upon arriving off Martinique the cunning and skilful 60 year-old repulsed Hood s attack at the Battle of Fort Royal on 29 April. Shortly afterwards Rodney took the British fleet to Barbados, thereby allowing de Grasse to attack both St. Lucia and Tobago, although he only succeeded in capturing the latter on 2 June after brushing aside Rear-Admiral Francis Samuel Drake, who had been detached by Rodney to protect the island. When Rodney did sail southwards, the enemy fleets were briefly in sight on 9 June, but it not being feasible for the British to mount an attack they separated. On 5 July de Grasse sailed north to assist the Franco / American armies in North America. Rodney claimed that he was too ill to follow his adversary, although avoiding a repeat of the row that had erupted over his usurpation of Vice-Admiral Marriot Arbuthnot s North American command the year before was also on his mind, and he left for England in August with the West India convoy consisting of over one hundred and fifty vessels.

With Rodney s return home Rear-Admiral Hood did sail to join Rear-Admiral Thomas Graves, who had temporarily replaced the uninspiring Vice-Admiral Marriot Arbuthnot as commander-in-chief in North America. The latter officer had earlier managed to prevent a French fleet from assisting the rebel forces in Virginia, but he singularly failed to press home any advantage in the relevant Battle of Cape Henry on 16 March. Graves and Hood s combined fleet of nineteen ships under the former s command then fought the poorly conducted Battle of Chesapeake Bay on 5 September, resulting in the surrender of Lieutenant-General Lord Cornwallis army at Yorktown, an event that signalled the loss of the American colonies to Britain. At the end of the year de Grasse returned to the West Indies to attack St Kitts, with Hood in pursuit.

In European waters, the Channel fleet of twenty-eight sail of the line commanded by Vice-Admiral George Darby relieved Gibraltar on 12 April, and during its campaign from June to November it monitored a Franco / Spanish fleet of forty-five ships which had been formed for grand designs under the command of Vice-Admiral Louis-Urbain de Bou nic, the Comte de Guichen. Fortunately, the allies were unable to reach an accord on any worthwhile operations, and it was only in August that they achieved something tangible with a landing on the British island of Minorca, leading to a protracted siege. On 5 August a British squadron under Vice-Admiral Hyde Parker fought a bloody encounter with a Dutch fleet of similar size at the Battle of the Doggersbank, and the year ended with Rear-Admiral Richard Kempenfelt s brilliant capture on 12 December of a number of ships out of a West and East India convoy, escorted by de Guichen s superior fleet.

Earlier in the year the French had despatched the brilliant Captain Pierre Andr , the Balli de Suffren, with five sail of the line out to India, whilst the British had prepared a force led by the unpredictable Commodore George Johnstone to capture the Cape of Good Hope from the Dutch. On 16 April Suffren attacked Johnstone at the Battle of Porto Praya, and racing ahead to the Cape he landed troops there to supplement the Dutch defences, with the result that Johnstone abandoned his enterprise. Sailing on to the Indian Ocean, Suffren arrived at the Isle de France in October to join Rear-Admiral Comte Thomas d Orves, who in January had taken six sail north to assist Hyder Ali attack Madras, but had left in April when the British were virtually on the point of surrender.

On 2 May Captain Sir George Collier s Canada 74 captured the Spanish frigate Santa Leocadia 34, whilst the ever ubiquitous Captain Sir James Wallace of the Nonsuch 64 fought an inconclusive action with the larger French Actif 74 over 14/15 May. Another inconclusive action was that fought on 5 June between the Ulysses 44 and the French frigate Surveillante in which the former lost the service of her three senior officers to severe wounds and was rendered unmanageable. On 28 May two tiny brigs valiantly engaged an American frigate for over four and a half hours before succumbing, whilst the frigates Flora 36 and Crescent 28 endured three weeks of unparalleled activity in the early summer, highlighted by their participation in the Battle of Cape St. Mary on 30 May. A mutiny aboard the frigate Santa Monica on 16 July led to sixty men being sentenced to death and a surprising intervention by Admiral Rodney, and the Battle of Cape Breton on 21 July saw two French frigates engage a British convoy with fatal consequences for Captain Henry Francis Evans.