On 6 February France signed a friendship and commercial treaty with the American Congress, and a month later officially advised the British government that it considered the colonials had already won their independence. The government had long known that war between Great Britain and France was likely but had refrained from ordering the impressment of seamen for fear that it might be regarded as an act of aggression. Now that war was inevitable a General Press of seamen was announced on 16 March, and at the same time twenty frigates and sloops were recalled from North America to meet the deficiency of such vessels in home waters, whilst Philadelphia was evacuated to ensure the safety of the economically strategic New York. In the first week of May King George III and his entourage arrived in Portsmouth to review the fleet s preparations amidst much pageantry, and eventually on 10 July war between Great Britain and France was formally declared.

Following the Seven Years War and its defeat at the Battle of Quiberon Bay the French fleet had been rebuilt and restored of vigour under the direction of King Louis XVI and his chief minister, Etienne Fran ois Choiseul. It now included sixty-three sail of the line ready for action, and if Spain joined the conflict, as was likely, then the poorly administered, poorly fitted and outdated British fleet would be outnumbered, allowing France the opportunity to exact the revenge it so desperately desired after its defeat fifteen years before. An attempt by the British to negotiate with the Americans and grant virtually everything they desired bar independence failed, Lord Carlisle having to concede that in enjoying French support the American rebels held the upper hand. The move was nevertheless an indication that the British government considered a war with France as being far more important than one with the American rebels, although hopes that the great war leader Lord Chatham might come to office to conclude a peace with the colonists and serve out France were dashed when he died in May.

The French strategy would be to keep their Brest fleet in home waters tying up large units of the British fleet and thereby facilitating captures abroad by the Toulon fleet.Whilst the great Admiral Lord Hawke regretfully declared himself too unwell for duty, Admiral Hon. Augustus Keppel, who like so many other brilliant admirals had refused to fight the Americans but was ready to fight the French, accepted command of the Channel fleet on 18 March, and in June sailed to reconnoitre Brest. He quickly returned to Portsmouth to demand reinforcements from a government that had seriously misled him over the French strength, and upon going back to sea he fought the inconclusive Battle of Ushant with the Brest fleet on 27 July. After a brief hiatus the political recriminations exploded when Keppel s subordinate admiral, the government favourite Vice-Admiral Sir Hugh Palliser, brought him to court martial for failing to defeat the enemy. The affair, which gripped the nation for months, caused the government no little anxiety and embarrassment, particularly when Keppel was subsequently acquitted, and it would lead to a great number of the worthier officers resigning their commissions.

Meanwhile on 13 April Vice-Admiral the Comte d’Estaing put to sea with the Toulon fleet of twelve sail of the line and five frigates and sailed to the Americas under instruction to assist the rebels. There were only three British men of war in the Mediterranean at this time and as such his passage was not initially disputed. Only on 9 June did Vice-Admiral Hon. John Byron set sail with a squadron cobbled together from the Channel fleet to shadow d Estaing. Throughout the ensuing summer and autumn the perils of poor weather kept both Byron and d Estaing s squadrons apart and in disrepair. Following a stand-off with Vice-Admiral Lord Howe s reduced fleet at New York in July and his failure to bring the inferior British fleet to action off Rhode Island in August, the French admiral refitted his fleet at Boston and sailed for the West Indies in November. He was followed in the next month by Byron, and with the worthy Howe returning home as a result of his own dispute with the government the command in North America temporarily devolved, much to everyone s horror, upon the despicable and much despised Rear-Admiral James Gambier. Earlier, on 14 September, the French islands of St. Pierre and Miquelon, off the southern coast of Newfoundland, were occupied without the shedding of blood by Commodore John Evans. 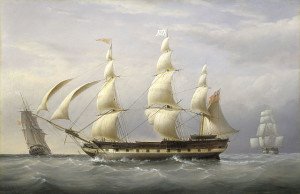 With the rich colonies of the West Indies presenting a lucrative target for the resurgent French fleet the bases in that area assumed a great strategic importance. The British fleets could refit at Antigua, Jamaica and Barbados, the French at St. Lucia, Martinique and Guadeloupe, and the Spanish at Puerto Rico, San Domingo and Cuba. In the Leeward Islands Rear-Admiral Hon. Samuel Barrington s squadron was initially under strength for the task of defending British territories and it could only stand by as the governor of Martinique, the Marquis de Bouill , captured Dominica in September. The reinforcement of Barrington by Commodore William Hotham with ships from North America in December was a sure indication that the government at home was re-appraising its priorities and was willing to sacrifice the retention of the American colonies for the defence of the enriching sugar islands. Barrington quickly assumed the offensive and attacked St. Lucia where he brilliantly defended his position from the newly-arrived d Estaing on 15 December.

When news of the war with France reached the East Indies on 7 July the British commander-in-chief, Commodore Sir Edward Vernon, joined the army in a combined attack on Pondicherry. Naval activity in August resulted in the flight of the French East Indian squadron to the Isle de France, and the capitulation of Pondicherry on 17 October.

In other matters the American press delighted in the infamous Battle of the Kegs , when the inventor David Bushnell sent a hundred mines down the River Delaware towards the panic stricken British men-of-war at Philadelphia on 5 January. They had cause for more celebration when a Scots-born privateer commander, John Paul Jones, captured the British sloop Drake in Carrickfergus Bay on 24 April. Other British defeats in single ship actions came with the unprepared Minerva s loss to the French frigate Concorde on 22 August, and the Fox s capture by the Junon on 10 September. The enterprising Captain Sir James Wallace of the Experiment 50 and his courageous consort Unicorn 20, Captain John Ford, restored some British esteem with his capture of the U.S.S. Raleigh on 28 September, whilst Captain Alan Gardner of the Maidstone earned praise for putting duty before profit following his capture of the French ship Lyon on 3 November. Earlier in the year there was a dramatic conclusion to a short engagement between the Yarmouth 64 and American U.S.S Randolph on 7 March when the latter suddenly blew up with the loss of all but four men, and on 6 October the rebels suffered more losses when Captain Henry Colins joined the Army in attacking their privateer nest in Egg Harbour, New Jersey.