Having been distracted by the arrival of the French fleet off New York and the organisation of the defence of Rhode Island, General Sir Henry Clinton, the British commander-in-chief in North America, resolved to regain something of the initiative by launching an expedition against Chestnut Neck on the Little Egg Harbour River in New Jersey, this small port hosting a busy privateer nest and the base for a supply route to General Washington?s army, as well as being in the vicinity of some important salt and iron works.

A combined force under the naval command of Captain Henry Colins of the Zebra 14 and the army command of an esteemed rifleman, Captain Patrick Ferguson of the 70th Regiment, was detailed off for this task. The other eight naval vessels with the squadron included the sloops Vigilant 20, Commander Brabazon Christian, and Nautilus 16, Commander John Becher, and a small number of galleys.

On 30 September the ships off Staten Island embarked four hundred troops, including up to a hundred loyalist volunteers, and put to sea. Their departure was noted by rebel intelligence in the environs of New York which quickly identified the purpose if not the destination of the force, and sent out riders to the coastal settlements to warn them of a possible attack. As a consequence three privateers were to put out from Egg Harbour, several warehouses brimming with British goods were emptied, and the civilian populace took flight inland. British intelligence was also busy, and it soon established that General Washington was despatching Count Kazimierz Pulaski?s legion to bolster the rebel defences at Little Egg Harbour.

A change of wind to the south hampered the squadron?s passage and it was not until midday on 5 October that it arrived off Little Egg Harbour Bay. The brig Halifax and gallies Dependence and Cornwallis were able to enter the river to dispute any further departures, and at dawn the next morning a body of troops were embarked into the gallies and the other shallow drafted vessels, with the remainder of the troops being transported in flat-boats and gun-boats. Their progress upriver was greatly hampered by the shallowness of the water, and it little helped that two armed vessels, the Granby and Greenwich, went aground near Osborne Island. Conscious that the Americans were aware of their mission the two commanders nevertheless proceeded with great resolution, and by 4 pm the force had arrived opposite the rebel base of Chestnut Neck which housed a dozen storehouses, a six-gun embrasure and several vessels. The same day saw the Zebra and two other of the larger vessels cross the bar into the Little Egg Harbour Bay.

But now the delay caused by the weather to their voyage south checked the British operations. Local loyalist sympathisers advised that superior enemy forces including artillery were closing in, and with an alerted hostile populace also looking for revenge it became clear that pursuing the expedition?s remaining objectives would place the raiders in jeopardy. Wisely, the two commanders decided not to pursue their original intention of driving a further dozen miles upriver to deal with a number of privateers that had sought refuge at a larger settlement known as The Forks, whilst an attack on the Batsto Ironworks was also rejected.

The squadron took the midday tide on the 7th, and by the evening were able to reach the Granby and Greenwich which were lightened and successfully refloated. Captain Ferguson meanwhile led a foray against the northern shore in which he destroyed the salt works and some other buildings before rejoining the squadron the next morning. On the 9th Captain Colins sent his boats against a small American privateer that appeared of the harbour mouth and with her crew fleeing in their boats she was easily taken. 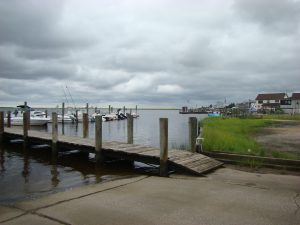 A modern view of Chestnut Neck

There was soon to be another twist to the operation however, for whilst held up in the bay by contrary winds the British were joined by deserters from Pulaski?s legion who brought advice that this force had arrived in the vicinity and was encamped nearby. They also advised that the Polish nobleman had infamously instructed his men not to offer their enemy any quarter. The two commanders resolved to attack Pulaski?s force immediately, so two hundred and fifty men were embarked in boats on the evening of the 14th and rowed some ten miles to be disembarked at 4am the next morning on Osborne Island. A bridge inland was quickly secured by Ferguson?s men, and engineers were left behind to work at the planking so that it could easily be removed should they be obliged to retreat. The raiding party thereupon advanced two miles up to a farmhouse where they surprised part of Pulaski?s legion in their sleep. Some fifty officers and men were overwhelmed by force of number and slaughtered, with just five fortunate prisoners being taken. Ferguson?s men were then driven off by the rest of Pulaski?s force, including cavalry, but were able to make their escape to Osborne Island across the weakened bridge which was destroyed.

The brutal sortie by Ferguson?s troops no doubt provided some compensation for the failure to attack The Forks and the Batsto Ironworks, but even then the expedition was doomed to end on an unfortunate note. The contrary winds kept the squadron pinned in the river for several more days, allowing for the arrival of the rebel artillery. It now became imperative for the small fleet to re-cross the bar and eventually all but the Zebra made it. On the 21st Captain Colins and his crew abandoned the sloop and she was set on fire to blow up the next day. Two days later the British arrived back at New York. At least they could boast of a partial success, as the rebel haven of Chestnut Neck was effectively put out of action for the remainder of the war.